OSPAT in Berlin at InnoTrans 2016 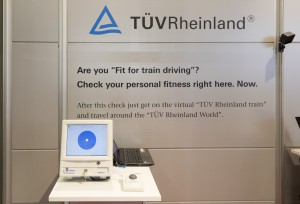 Thank you to our wonderful hosts TÜV Rheinland, OSPAT was on display and in action in Berlin at InnoTrans 2016.

Held every two years at the Berlin Exhibition Grounds, InnoTrans is the largest transport industry trade fair in the world. This year’s event featured 2,955 exhibitors from 60 countries and attracted almost 145,000 visitors from 140 countries.

TÜV Rheinland hosted three stands at this year’s event with a striking set up for OSPAT in their main booth. The theme: Before you get to “virtually” drive a train, using HTC’s VR-Headset and Joysticks, you have to be OSPAT tested to make sure you’re fit to do so.

During the exhibition there were over 100 OSPAT tests performed with a lot of interaction with a crowd dominated by the rail industry. Further exposure ensued as OSPAT and driving a virtual train became a party trick highlight for guests at the TÜV Rheinland evening gathering with some amusing results as people relaxed to the music and entertainment.

The opportunity to network and meet new friends was fantastic with some real standouts. 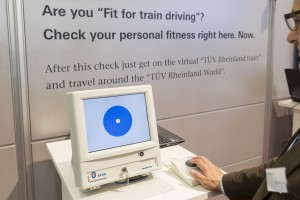 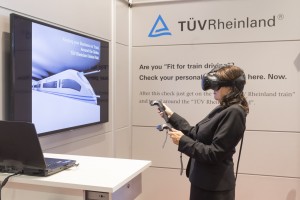